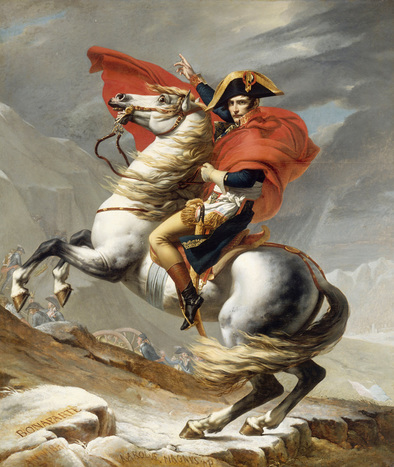 NAPOLEON CROSSING THE ALPS by Jacques-Louis David 1801
The history of France dates back to nearly two million years ago. This part of Europe was first known as Gaul, a territory Julius Caesar conquered in 51 B.C. The Romans took over the land and built many of the ancient structures that are still standing today.

By the end of the 5th century, a Germanic civilization known as the Franks overtook the Romans and gave France its name. France grew during the Middle Ages until the Hundred Years’ War when it fought England for the territory. The famous Joan of Arc helped lead France to victory and eventually forced England out of the country.

Beginning in 1494, the Renaissance had spread and France was realizing its cultural wealth. In the 1600s the “Louis” kings reigned – ending with King Louis XIV in 1715.

Over the next few centuries, France saw many rulers as well as its fair share of ups and downs. The country was involved in both World Wars but its economy has recovered, making France a prosperous country. France was even one of the founding members of the European Union in 1957.
SOURCES:
A Short History of France: http://www.localhistories.org/france.html. Retrieved 30 April 2015.
A Brief History of France: http://www.learn-french-help.com/history-of-france.html. Retrieved 30 April 2015.
Powered by